For other green-named and green-colored pikmin, see Green Pikmin (disambiguation). 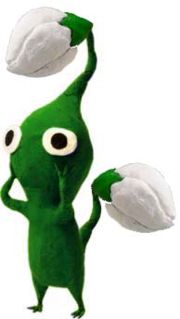 Green Pikmin are the final type of Pikmin encountered in Pikmin: Sinister Incinerator and the fifth Pikmin encountered in Pikmin:The After Years. They are found above ground in the Ancient Wetland in Pikmin: Sinister Incinerator and in the Relentless Spring in Pikmin:The After Years. They are the only new Pikmin in the game that have an onion. Once you have Blue Pikmin you can reach their onion's location. These Pikmin have but one ability, but it is very useful. They can resist stiky effects. Stiky hazerds are different from gasses; instead of appearing as , black gas they are pink gas. Upon closer examination, these Pikmin have big gills similar to those of Blue Pikmin, but they serve to filter the stiky sazerd when submerged in it. They aren't waterproof at all.Also the onion can only seport 900.

Despite water and life existing, which would indicate that at least some Hydrogen ions are floating about, it seems there is only one kind of acid native to the Pikmin Planet: some type of copper solution. The Green Pikmin's skin contains these acids when it is most stable, and this gives it its green color and makes it's skin immune to such acids. As with any other liquid, the copper acid can contain gaseous solutes, and the pikmin has gills, so it can survive being submerged in the copper-acid.

Green Pikmin are as susceptible to acetic acid as any other Pikmin. This was discovered by accident, of course.

In other games of pikminEdit

The green pikmin are super light and can turn invisible. Also it can detect toxic berries.

Green Pikmin are encountered later on in Altitude Springs. They retain their stiky resistance and are useful for defeating enemies such as Jungle Bulborbs. They have a big gill instead of mouth-like gills. --Neini8 02:59, 23 July 2009 (UTC)

Green Pikmin are also received in P15:ToYL. They fly with leaf-like wings on their back. Green Onion, Sunray Fields, Fern Candypop Bud. Seventh out of ten found.

Green Pikmin are the second type of Pikmin found,they are in a small alcove, in The Noxious Swamp. They are still acid-resistant, and can destroy acidic geysers. --BeatOli 19:20, 29 August 2009 (UTC) Pikmin: Shadow Planet

Green pikmin have gills on the sides of their head instead of the front and are resistant to acid. They are the 8th pikmin found and are found in the Poison Swamp.

in pikworld. Green Pikmin can take control of any enemie after defeating them. The enemie will shrink and grow a pikmin stem

this pikmin is one of the stranger pikmin, the only stranger one I have seen is lava pikmin, but the only one’s left went to the dark side, I guess I might have to destroy those

they are resistant to acid, and have acid for blood, when eaten the enemy that ate them disintegrates leaving NOTHING behind, even the treasure disintegrates, making a downside for sacrificing them to bosses, they have a piranha plant on their stem that increases their carry strength, they attack by spitting acid at enemies, it does 2 attack (20 damage)carry strength 5

Retrieved from "https://pikminfanon.fandom.com/wiki/Green_Pikmin?oldid=26550"
Community content is available under CC-BY-SA unless otherwise noted.