Pikmin: Global Breakdown has great quality and provides much information. Please improve this article more by editing this page.

Pikmin: Global Breakdown is the third installment of the Buildup Trilogy for Wii, PS3, Xbox 360, and PC, but you can use the GameCube controller for Wii. The setting is on the pikmin planet with Olimar, Louie, President and Pikmin. The pikmin planet has become more hostile and cold. The climates are changing, the enemies are going through scary adaptations, and the oxygen levels are dropping. Some species are becoming extinct, such as the Lesser Spotted Jellyfloat and the Greater Spotted Jellyfloat. There are some new enemies that are very rough. The controls are the same as Pikmin 1 NPC but translated onto the Wii controller. There are some new controls though.

This game is in the Buildup Trilogy. The buildup trilogy is three games that build up to the unknown pikmin game of a serious nature.

The Piklopedia is different. See it.

Each character has a different ability that affects gameplay. It also affects how you handle the Pikmin squad.

After the events in Pikmin:Redemption, President called Olimar for a meeting. At the conference table, President said that the pikmin planet is acting weird. Louie was eating a cookie. When President told Olimar that the pikmin planet might die out, Louie dropped his cookie and was saying that all of the best gourmet food comes from there. President says that there still is treasure on that planet, and he wants it all. Olimar wants to save the planet and Louie wants to save his recipes. Olimar and Louie are sent back to the planet of the pikmin in the Dolphin 2.0.

Olimar and Louie land in the Dolphin 2.0 at the ruined Perplexing Pool. It is snowing, there is heaps of rusted garbage, and the grass is brown. Louie gets out to explore and doesn't return... Olimar gets out to see louie is on the top of a Titan Dweevil! there is some red pikmin attacking its legs. call them back to get them. to destroy this titan, just attack it's legs. when louie falls down he is a treasure-The King of Bugs. Take him back to the Dolphin 2.0 and louie will appear in the cockpit. When he gets out he jumps for joy! There is an enclosed area with 20 pellets to get more red pikmin. But wait! Where is the Red Onion?? The enclosed area is where you find the yellow onion in Pikmin 2. The Red onion is where the yellow onion was in pikmin 2. The Dolphin 2.0 is where the fiery bulblax was and the gate was moved to the entrance of the former yellow onion's stump. The stump is the landing site.Just gather 20 pikmin to attack the wall blocking your exit to the rest of the level.

Olimar and Louie land at the same place, when a single Toadstool has lured Pikmin out of the onion. It lured those pikmin to the Death Virus Dweevil's nest. While Louie stays at the ship, Olimar has to get through obstacles to find the nest. When you try to attack the Death Virus Dweevil, it will launch spores that begin to cloud up the screen and then Olimar will black-out... Then the game will do a background save and you will wake up at the next area on the next day...

Olimar wakes up at a lake. He now knows it is the Forest of Hope. He wonders why this area has come back. It is snowing too.He sees a lone Red Pikmin run across the snow. A strange object appears in the sky and blasts the Red Pikmin to bits. Olimar hides behind a can filled with bomb-rocks. The small kind. He takes the bomb-rocks and quickly makes a slingshot while the strange object captures a Dwarf Red Bulborb. He flings a bomb-rock at the strange object that is a spaceship. It blows up and falls to the ground...

Much later, after olimar has regrouped with louie and has found all types of Pikmin, Olimar had to defeat Kripto, the dark energy-wielder of Kryptonite. That caused a chain-reaction of the core of the Pikmin planet and forced Olimar and Louie to leave to Hocotate. The planet was really dying out, and Olimar could see it through the cockpit window of the S.S. Dolphin 2.0.

Back at hocotate, Olimar and Louie went to the President of Hocotate Freight's office. President fussed and whined at the Dynamic duo of space explorers for not getting all of the treasures. Olimar explained the Kryptonite creature to Boss. He was still mad even though Kriptonite is the most lethal substance in the galaxy. He ordered them to go back to the planet and find Kryptonite because it is so expensive, not even pokos will pay for it, neither golden pik-pik carrots! As Olimar blasted off, he realized that he left his Pikmin during a major breakdown storm...

In the middle of a breakdown storm, Olimar lands at the eye, which is The Woods of Faith. All of the pikmin were out of their Onions and the Purple and White were all out of their dens. All attacking a Hairy Bulborb, they were losing... Olimar used a bomb-rock slingshot like earlier and exploded the foe. The Pikmin all rushed to Olimar's side and were hid, crouched behind Olimar in a state of cowardice. The storm only got worse...

Later, Olimar and Louie are at The Sparkling Lake. They receive a message from President. He wants to help get the treasures. When they all meet up at The Final Trial, a giant tick is seen far away where Emperor Bulblax used to be. They venture towards it when a Breakdown storm builds up. Then the tick is seen being struck by lightning and glowing. Olimar, Louie, President, and the Pikmin group attack the tick. When the outer shell is broken, a cave hole is on the side of the tick. Go in to be at Cell Pool...

Cell pool resembles the inside of a human. You travel through unknown tubes in the tick, stopping at the heart, stomach and finally the brain. All of the inside of the tick is infected, so clean it to stop the total breakdown. You cant stop the changes that already have affected the distant planet.The final boss has hijacked the brain to control the tick to suck up the planet's energy and have enough energy to find the Kriptonite Spore so the final boss can become immune to Kryptonite, the most dangerous substance ever.

Inside the skull, the final floor, Olimar and co. see Venom Paracite,the final boss of PGB! President described the battle as a suicide mission or a get-your-self-killed-for-a-stupid-reason. Olimar has to fight it off until the brain is damaged and the tick dies. Then, the Venom Paracite opens a wormhole and Olimar co follows the parasite into The Portal! There, the final battle commences.

After Venom Paracite is slain, small mitites scramble away. They were inside of the bigger parasite. Fireworks launch from the remains of the final boss and Olimar is seen jumping with joy and playing with the pikmin. Louie holds up his recipe book and does a backflip. President screams that he is rich and hugs Olimar. "Olimar, you're now second in command! Show me how you get so rich!" Then Olimar's eyeballs pop up. Then all of the pikmin colors (Flowered) are lined up in a row when twilight is creeping over the horizon. All of the colors jump around and dance. Then their flowers glow with their color and they seem to fly away! This is a power of Kryptonite! Then that substance must be on the planet...

The search for Kryptonite is Challenge Mode. You have to find the Kryptonite gems and return them to the pod under a time limit.

After Olimar returns to Hocotate, there is a strange communication coming from an alien planet. Then Olimar disappears and appears in the Kryptonite Rift with all of his pikmin. You have to go into the Void and find the Kryptonite Paracite. Once you beat it, it gives you a Kryptonite Diamond. When the pod takes it, the pod glows and explodes. The cave explodes and Olimar is on Hocotate with a Kryptonite Diamond.

Go to Photo details to listen to .ogg file.--

My Theme.ogg
The loading screen music
PGB Olimar Leaves.ogg
When Olimar departs the planet the first time.
Add a photo to this gallery 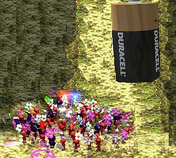 Beta picture depicting the finding of an AA battery. (Like Pikmin 2, this game has A LOT of in game advertising.)

loading gif used in the corner of the screen when loading a cutscene.
Add a photo to this gallery

The one and only,

Retrieved from "https://pikminfanon.fandom.com/wiki/Pikmin:_Global_Breakdown?oldid=23876"
Community content is available under CC-BY-SA unless otherwise noted.