− + − Pikmin Wii is peanut64's idea for a Pikmin 3.(Please do not edit without my permission-Peanut64-RandomStuff 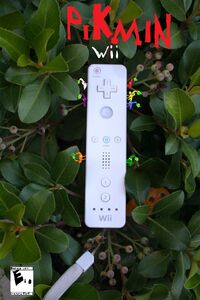 − − On Hocotate, Captian Olimar was showing a pikmin to a group of Hocotatian scientists. It was a red pikmin. It was in a toxic-proof jar. The scientists were asking too many questions.The screen scrolls in on to a boy who wants a job at Hocotate Freight.The setting is in front of the hocotate freight building. He has a telescope and views the whole area. No people. He points the telescope at the starry morning sky hoping to blast off as a hocotate freight space captain. He views a strange red object falling towards the sandy surface. He bangs on the doors hoping the strange object doesn't fall on him so he can get in but no one is home! The boy, named Glaxy runs around frantically then uses his shovel to bury himself for safety using a straw to breathe...

− − The object falls on top of the hocotate freight building and releases a Red pikmin with a blue headband. The pikmin attacks Glaxy and he drops a tear. the pikmin stops and feels bad for attacking a child.

− − When Glaxy goes inside the Hocotate office building, he brings his little pikmin dude with him. Glaxy talks to the President and gets a job as a rookie pilot. Olimar comes over to the President's office and shows President a video screen of the meteor hitting the dolphin. in a scrolling through and pausing reveals that a big chunk of the meteor is a glowing crystal.... Olimar wants to take Glaxy to the pikmin planet for investigation. They blast off to find the meteor chunk...There is one area open: Frosty Woods. This is where you find the crystal gem. A Goliath Mamuta guards this treasure.

− Olimar is the main character but Glaxy is highlighted a bit.

− Louie is not really big in the first part of the game but grabs the spotlight when Olimar is injured and hocotate freight needs a replacement captain.

− Glaxy is the new guy with the green captain light. Glaxy is newer than Louie was in Pikmin 2.

− Elroy is an old friend of President. His light color is yellow. He comes in when he needs money to pay for the losses he made when crashing on an uncharted planet with ravenous space bunnies. Then Olimar, Louie, and President come with Elroy to get more money on the Pikmin Planet.

− Olimar's son, Sagittarius was riding a space-taxi to the vacation planet Vendoor IV. The space-taxi was hit by a comet and it fell to the Pikmin planet...

− Libra is Olimar's daughter. She was on the space taxi that Sagittarius was on...

− Interstella is Olimar's wife who was on the space-taxi that Olimar's kids were on. She is trained to become a captain to help the kids survive. She has a Pink light.

− Giegiss is the pilot and mechanic of the space-taxi that Olimar's family was on. He tells you what treasures to get to make the ship parts for the space taxi.

− Murphy spent his life living on the Pikmin planet. Having his lungs change to fit the right type of oxygen, he lived as a pikmin! He now is 100 and very energetic.

− Bulbie is Olimar's dog. He blasts off to the pikmin planet to save Olimar's family and Hocotate Ship guides him. The Ship is activated to land when you turn the throttle off. The dog knows not of this. He lands in Tidal Cools' sandbeds.

Retrieved from "https://pikminfanon.fandom.com/wiki/Pikmin_Wii?oldid=26262"
Community content is available under CC-BY-SA unless otherwise noted.