The ship is the common name for Olimar's new rocket in Pikmin 2. It is not named in-game, so it is simply referred to as "the ship"; all that is known is that Olimar sometimes refers to the ship as a "he". In Super Smash Bros. Brawl, it has also been called the "Hocotate Ship". Unlike the S.S. Dolphin, the ship is capable of speech, (replacing most of Olimar's in game speech), and takes on the role of giving advice throughout the game. Olimar makes his opinion of its personality being pompous and smart-alec known in his notes. Once the President's debt is repaid, the ship is upgraded into a sleeker, golden model.

The ship can store Pikmin, and does so, storing both White Pikmin and Purple Pikmin. Unlike the Dolphin, the Captains cannot check how many treasures have been collected using it nor restore their suit's damage meter. Standing in the green light and pressing A before Purple Pikmin have been found does nothing. The ship has two cockpits, and is capable of deep space communication, sending a report each night to Hocotate and receiving mail. To do this it must be in orbit around the Pikmin Planet. The ship can dispatch a Research Pod for traveling underground.

When traveling underground into caves, the ship dispatches its nosecone, known as the Research Pod, and sends it with you into the cave. It is used to store any treasures and enemy carcasses to be sold to pay off the debt upon exiting the cave. In emergency cases, it can empty its cargo, take in Olimar, Louie and the Pikmin, and return to the surface; should this happen any carcasses and treasures collected are lost.

When one complete "series" of treasures has been collected, the ship's Sales Pitches become available. This is an advertisement for the treasure as if it were a product.

Superstick Textile
The latest must-have item for all ship emergency-repair kits, this miracle fabric is a lifesaver! Its adhesive power is so great, once it's applied, it can never be removed...not even surgically!

Super Mario Galaxy has a planetoid shaped very similarly to the ship located in the "Space Junk Galaxy". It is likewise a red, rusted color.

The ship also appears in Super Smash Bros. Brawl. During the beginning of a match, Olimar enters the stage in the ship and jumps out to pluck three Pikmin. When Olimar uses his Final Smash, "End of Day", he hops in the Ship while Red Bulborbs cause damage to his opponents. Olimar then crashes down back on the stage, sometimes further harming his opponents. In the Subspace Emissary, Olimar's ship is seen along with a number of other airborne vehicles in the attempt to enter Subspace as well as the beginning of the level Outside the Ruins. In the Great Maze section of the Emissary, it appears in the background as part of the level's scenery. If Olimar uses his Final Smash while on top of the Bulborb in the "Distant Planet" stage, the ship steers away from the Bulborb as it falls. The ship also appears as a trophy and a sticker. In Super Smash Bros. Brawl, the trophy names the ship, Hocotate Ship. 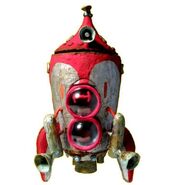 The Research Pod
Add a photo to this gallery

Also, in Pikmin:The Rising Darkness, it has an upgrade, called The Sub, which allows it to accompany Olimar underwater.

In pikmin 4, the ship is redesigned and renamed the Hocophin. (it is a cobonation of the Hocotate Ship and the Dolphin, thus giving it is's name, Hocophin; Hocotate ship + Dolphin.

Retrieved from "https://pikminfanon.fandom.com/wiki/The_Ship?oldid=22584"
Community content is available under CC-BY-SA unless otherwise noted.